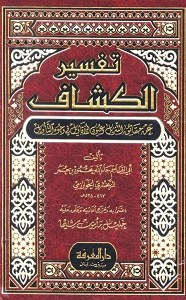 Al-Kashshaaf ‘an Haqa’iq at-Tanzil, popularly known as Al-Kashshaaf (Arabic: الكشاف‎, translit. al-Kashāf, lit. ‘the Revealer’) is a seminal tafsir (commentary on the Qur’an) by Al-Zamakhshari written in the 12th century. Considered a primary source by all major scholars, it is famous for its deep linguistic analysis, demonstrations of the supremacy of declamation of the Qur’an, and the representation of the method the Qur’an uses to convey meaning using literary elements and figurative speech. However, it is criticized for the inclusion of Mu’tazilah philosophical views.